Costruzioni Navali has realized numerous vessels transporting passengers, both steel and alloy made. 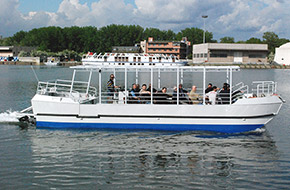 “Le due rive”
Recently built (2009), it works on azure waters of the river Ticino. The jet propulsion and the hull made of light aluminum allow safely challenging the shallows, characteristic of the area. Motorized with 2 motors Aifo-fpt 180 hp at 2,800 rpm, it reaches a speed of 22 knots, with a draft of a few centimeters. 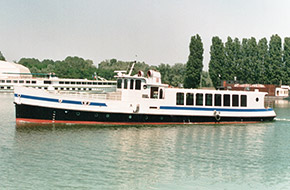 “Mattei”
The motorship that sails on Adda waters in upstream portion of Pizzighettone, was made from the conversion of a river tug, to which have been renovated all of the superstructures, the motor apparatus and all the plants. Equipped with two motors Aifo, it reaches a speed of 10 knots. The maneuverability is assured by a bow thruster with electro-hydraulic operation 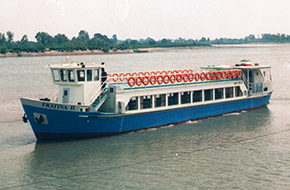 “Fratina 2”
It can carry 220 people, counting on a power of 500 hp at 2,200 rpm and a bow thruster that allows great maneuverability. The large air conditioned lounge with bar is used for parties and congresses; the sun deck allows you to admire landscapes during navigation. Fratina 2, RINA class, is the result of the conversion of a vessel used to transport inert. 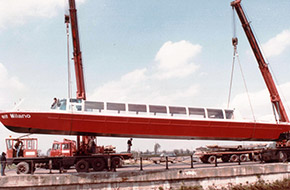 “Elf”
One of the first achievements in the field of transport passengers carried out by Costruzioni Navali. This boat has two hydro jets which allow it to carry 120 passengers with a draft of only 70 cm. After having worked on the waterways ( Navigli) in Milan and sailed for a few years on the Po, between Cremona and Mantua, is today used in Pavia, after its taking over by Costruzioni Navali in 1995. 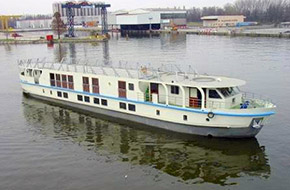 “Mary”
A cruise ship in class RINA, derived from the conversion of a boat for excavation and transport of inert. Long 45 and wide 7 meters, it is equipped with restaurant, lounge, bar service and sun deck. Eight double cabins with services and two suites are available. Five other cabins and the commander's quarters are reserved for the crew. 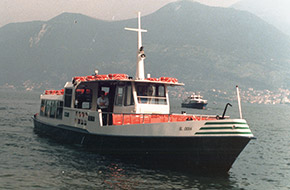 “La naf”
Built in our shipyard in Travacò Siccomario in 1990, the motorship has reached the lake Iseo with an oversize load. It is capable of carrying 120 passengers and its 25 meters length streamlined hull is equipped with an Aifo engine 180 hp at 1,800 rpm.